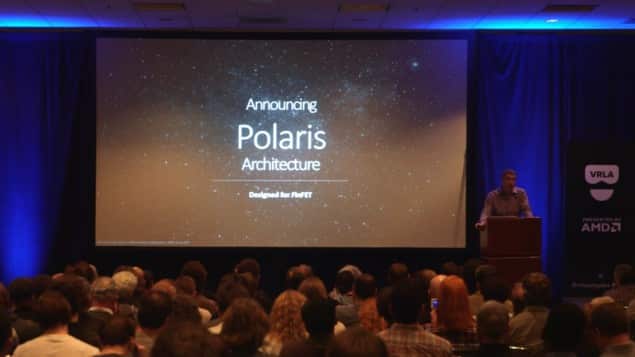 Though AMD Polaris graphic card, is getting famous day by day, so far AMD has not revealed much details about the pricing or Radeon 400 release date. But we have gained few details about it, through presentations at events like VRLA. Today, Roy Taylor has revealed few interesting notes about Polaris Architecture. He said it will be a 14nm FinFET architecture that can easily target the VR market. Also, AMD Polaris will hold the minimum specifications required for Oculus VR headset to function.

We require 2k resolution at 90 frames per second for running Oculus Rift headset. This graphical horsepower can be produced by GTX 970 or the Radeon R9 290 or other equivalent GPUs. But, both the above GPUs cost $349. Because of its pricing, only few units of VR headsets are sold in market. AMD believes, that Polaris architecture will be efficient enough to solve this problem.

AMD Polaris Architecture will make use of 14nm FinFET process. It allows more transistors to be placed on the same surface area. The interesting point is it will be available for lower cost and hence it is expected that AMD can sell more volume of units. AMD hopes to exercise this advantage by lowering the cost of “minimum spec VR” to a point below the $349 mark. It implies, more number of VR headsets will be sold in future. Hence Total Available Market for VR will considerably increase.

What will be the Price of AMD Polaris GPU?

There are certain interesting implications from the speech of Roy Taylor. AMD Polaris graphic card will be equivalent in power to the R9 290 at a cost much lower than the $349. It is rumoured that the GPU will approximately cost $250. It is expected to provide a tough fight with performance of Hawaii counterparts in 2H 2016. AMD Polaris graphic card will be an efficient GPU that can offer more performance at the same dollar amount.

It has taken long time for AMD to shift from 28nm process. Sure, Polaris to going to set a mark with its 14 nm process. It is going to excite PC gaming enthusiasts all over the world with its performance.